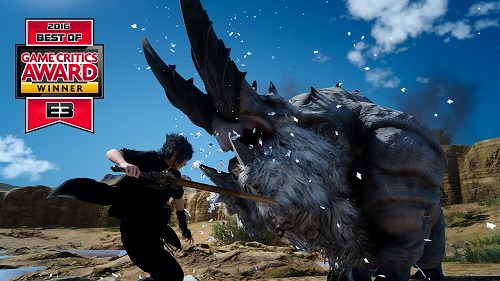 The full results can be found here: http://www.gamecriticsawards.com/winners.html.

About FINAL FANTASY XV:
FINAL FANTASY XV is the highly anticipated action roleplaying game (RPG) and 15th mainline entry in the iconic FINAL FANTASY franchise. Set in an enthralling world where fantasy meets reality, players will join Crown Prince Noctis and his comrades on an epic journey of brotherhood, love and despair as they unravel Noctis's destiny and take up arms against the warmongering empire, Niflheim. With a captivating cast of characters, breathtaking visuals, open world exploration and action-packed real time combat, FINAL FANTASY XV is the ultimate FINAL FANTASY experience for fans and newcomers to the series.

FINAL FANTASY XV will be available September 30th, 2016 for Xbox One and the PlayStation®4 computer entertainment system. This game is not yet rated. Please visit the Entertainment Software Rating Board (ESRB) website at  www.esrb.org for more information about ratings.

FINAL FANTASY XV
Trailers/videos on this page may only be displayed behind an age-gate that: (1) is age-neutral (i.e., requires the user to input their date of birth or select it from a drop-down bar; (2) employs reasonable technical measures to keep underage users from re-entering their age after initially being denied access; and (3) does not display any ESRB rating information on the video player or the age-gate itself. Failure to implement these requirements may jeopardize your ability to obtain material of this nature from us in the future.
This is taking longer than usual to load.
Close